My name is Alexis Bahner and I am 19 years old. My inspiration  for this blog was to bring awareness to the ongoing debate on the high drinking age that we currently have in America while also bringing forth a new solution to find a middle ground for both sides. My blog, while opinionated, is filled with research. If you happen to want a more in depth look into the information I am giving, feel free to click on the hyperlinks I provided so that you may confirm all that I am saying.

Being a 19 year old in college, this topic is one that I do fin d very important as I am in the most vulnerable age group. While its illegal for anyone under the age of 21 to drink alcohol, those between the ages of 18-20 are at the highest risk as we are legal adults and hence would receive harsher punishments. Thank you so much for taking the time to read through this and if you have any questions, please email me.

Background on the Topic 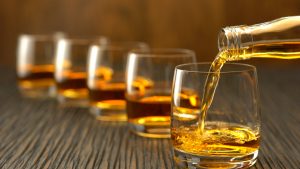 In 1984, the United States government voted to increase the minimum legal drinking age (MLDA) to 21. This new legislation was called the National Minimum Legal Drinking Age Act (CDC). Prior to the vote, the legal drinking age was determined by state, yet most had it set at the age of 18; which is considered to be the age at which a person becomes a legal adult. However, the federal government really has no legal say in what the legal drinking age is based on the states rights that are given in the Constitution, so they told the states that if they didn’t comply with raising their MLDA they would pull their highway funding (NY Post). Now, they did have a reason to make such a drastic move. The motivation was to help combat the number of deaths related to drunk driving.

However, it would be false to say that this drop could be purely because of the raised MLDA. As the science shows, the decrease in drinking dropped rapidly across two age groups, one of whom was not affected by the new drinking age. It also shows that there was a decrease in drinking across all age demographics. Now, the new age restrictions could be a large part of it, however, since the MLDA was raised, the government has been much harsher with their laws and punishments of anyone who breaks those laws. The current decrease in incidents related to drunk driving could also be attributed to new technology that allows for people to call friends, family, or a driving service so they can get home safely.

I would like to point out that the raised MLDA has also created many issues that have become a point of debate. The first would be that currently turning 18 leads to no further freedoms. Sure, a person could live on their own, sign a contract, adopt a child, be charged for a crime as an adult, or enlist in the military, but they can’t smoke a cigarette or purchase alcohol (NY Post)(Youth Rights). It seems as though there is an unequal balance where there are many more responsibilities, yet no freedoms to balance it out.

Another is that the new drinking age has created an awkward gap in the college population. It’s put students in a position where they feel the societal norm is to drink, yet if they get caught drinking underage or supplying alcohol to underage students the charges are much harsher as they are legal adults. Dr. Laurence Steinberg, a psychology professor at Temple University stated, “We’ve set up a real dilemma on college and university campuses, where basically you have half the people who are enrolled legally permitted to drink and the other half not legally permitted to drink. And I think that that sets up all kinds of dysfunctional and strange patterns of drinking as a result of that. I think setting an age where it would be legal for [all] college students to drink would probably improve things,” (CBS). This statement is really showing the significant barrier between students on a college campus right at the point where they are finally beginning to become independent and need the most support.

A third argument I would like to bring to the table is the topic of the societal pressures of drinking in college. It’s plastered everywhere from music videos, to tv shows, to movies. Children in America grow up on the idea of college frat parties being a societal norm, and with parties, comes alcohol. The new drinking age means that students are still going to find ways to obtain alcohol and party, but they are going to reach for liquor and spirits as they are easier to hide and easier to mix. Students are willing to binge drink harsher substances for the chance at being considered normal in college due to the higher drinking age.

The final argument is the safety of young adults between the ages of 18 and 20. As it is illegal for people under the age of 21 to drink, it leads to serious consequences for any person involved in underage drinking. Once they hit this specific age bracket, however, those consequences increase dramatically. So, to make sure that they aren’t caught, they will put their lives on the line before they receive help. If a young adult happens to drink too much, they will almost certainly refuse medical attention unless it becomes absolutely necessary. In cases where a person does need medical attention, they also aren’t sure they will be able to rely on their friends to get them the aid they need if their friends are also scared of being pulled into the consequences.

I believe that there is an easier way of ensuring that the effects on the public health of Americans are minimized along with the issues that come with the raised drinking age. We should attempt to have a system similar to what is seen in certain European nations where the legal drinking age is split. However, rather than the ages being set at 16 and 18, it would be a raised age of 18 and 21. This means that people at the age of 18 would be able to purchase alcohol such as beer, wine, and seltzers; all that have a lower alcohol percentage. However, once they reach the age of 21, they would be able to purchase harder substances such as spirits and liquors.

I believe that if we made this change, we would see a massive difference in the college drinking culture. Sure, you will still have harsher substances come up at parties, however I think that we will see even organizations such as fraternities and sororities going back to providing beer, which is much cheaper, because they wont have the need to hide it.

Overall, the new system would help equal out some of the imbalance that comes from the high responsibility and solve most of the age gap found in colleges. I believe we would also see students being more comfortable with the societal norm, without too much overindulgence, and young adults would be able to get the proper medical attention that is necessary without fear of the consequences.

The American partying scene has been something that Hollywood has romanticized more and more as the years have gone on. Even after the minimum legal drinking age (MLDA) was raised to 21, alcohol is depicted in almost every video, show, and movie that pertains to teens and young adults. Due to this, there should be no question why teens as young as 14 feel the need to drink to fit in with American societal standards.

It has been proven that alcohol, in any amount, isn’t good for the human body or brain. However, it’s binge drinking that people really need to watch out for. “Binge Drinking” has become a fairly common term nowadays in terms of drinking more that a fair amount, but, it’s actually defined by a male having five standard drinks, or a female having four (CBS). This binge drinking culture has also become more normalized, or even considered to be cool.

“Blacking out” is another more common phrase used. This term is used when a person drinks to an amount where they were conscious, but can not remember their actions for a duration of time due to having drank an excess amount of alcohol. While extremely dangerous, this too has become something “cool” for young adults. This type of drinking is coupled with “high-intensity drinking” which is when a person has double or more the amount considered to be binge drinking (NIAAA). While this type of drinking is often encouraged by friends and peers, this is the type of drinking that is exceedingly dangerous and can lead to hospitalization.

How to Talk to Your Child about Drinking at College

Start young. Many children will begin drinking alcohol before they even graduate high school if they have the opportunity. The best thing that a parent can do is to be open about the dangers of alcohol and let their child ask questions. Once your child begins entering an age where they may be likely to try alcohol with friends (this age varies by the child), sit them down and allow them to have a small amount of alcohol at home under your supervision. This will show your child that you support them and and their development in life and allow them to be more open with you about what they are drinking. Also, if you are open about alcohol, it takes away the sense of rebellion, and the need to keep it hidden, so they may not feel the need to drink as much, because they know that they will not be shamed or in trouble for drinking with friends as long as they are safe.

Even if you do not want to allow your child to have alcohol under your roof, just talk to them and ask them to be open about what they are drinking and when. It will allow them to create a new type of bond with you, where they feel they can trust you on more sensitive topics, rather than keeping them all hidden. Remember communication is key!

Welcome to onMason. This is your first post. Edit or delete it, then start blogging!